How do i Link my Aadhaar with Bank Account for LPG Gas Cylinder Subsidy?

Government is all set to launch Aadhaar for LPG gas Cylinder subsidy for 6 cylinders per financial year. So all people will holding a LPG gas connection from any of the State owned LPG company will get cash subsidy directly into their Aadhaar linked bank account.

So all you have to do to get the cash subsidy is to get a Aadhaar card and link it with your savings bank account.

How to Link your Aadhaar card with LPG Connection?


How to Link your Aadhaar card with Bank Account? 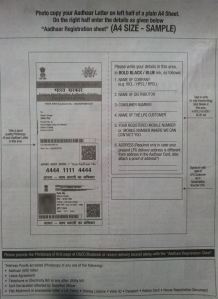 (Sample Source : Advertisement by the Government)

How do i Get a Aadhaar Card?
http://appointments.uidai.gov.in/easearch.aspx (Check the nearest center here)

Posted by Testingvidya at 10:05 PM No comments:


Direct cash transfer is all set to launch in Andhra pradesh amidst all the hu-hallah with East Godavari district's Gollaprallau to be the first one where it is to be tested. Direct Cash Transfer is termed as a way to reduce the role of middle man and reach the beneficiary directly. The Government subsidies and other benefits are directly given to the poor in cash via a Aadhar linked bank account thus plugging the leakages in the existing system. So the end user can get the PDS Grains or Kerosene subsidy directly into his bank account instead of it being given to them via ration shop owners.

LPG and kerosene subsidies, pension payments, scholarships and employment guarantee scheme payments as well as benefits under other government welfare programmes will be made directly to beneficiaries. So instead of giving subsidy on Kerosene and other items directly, Government is giving Cash to the poor and abolishing direct subsidy on these items.The risk is that whether the money given to the poor is used for these items or other purposes is very difficult to trace and a strong mechanism is needed to make sure real benefit is reached to the poor.

Bank accounts is another thing which is in focus as only 40% of the Indians have a bank account and lack of bank branches in the backward areas may act as a hindrance to implement this scheme in many states. Lack of ATM's to withdraw money, educating poor on usage of ATM , Aadhaar card distribution and enrollment and linking it with Bank accounts are few other challenges which the Direct Cash transfer scheme might have to face before the real benefits are seen on the ground.

With April 1st,2014 as the All India Roll-out date, Government has to work Day and night if they want to implement it successfully. Otherwise it will also be like any other scheme running for decades without any real impact.

Posted by Testingvidya at 9:43 PM No comments: